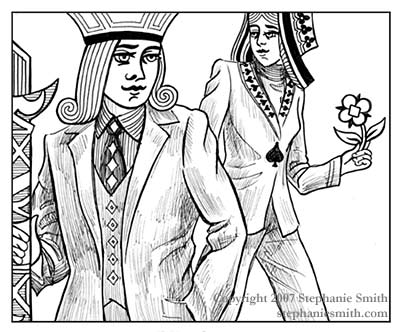 Well, this ones a day late and a dollar short, but I was still getting my blog set up when this was the Illustration Friday topic of the week and the idea was sticking in my head so I had to get it out.

I may post a color version later; I have a pretty clear idea about what I want to do with it, but I ran out of time.

I was working on this one and the next image at the same time over the weekend; they took a few hours each. Honestly, Id forgotten just how much fun it was to make something quick and simple but still a finished drawing as opposed to a sketch or a doodle. Working on my thesis the pieces were so large and time consuming it took at least 3-4 weeks to complete a single drawing. Those are very satisfying to do (theres something meditative about spending 4 hours doing nothing but background foliage) but it can get a bit wearing after a while without something a bit lighter to work on to break it up.