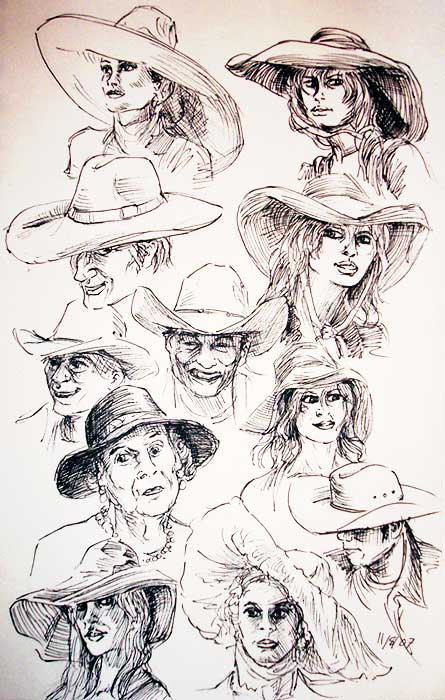 I’m trying to get back into the habit of posting here, after several weeks of slacking. The remodeling bug has hit and my studio was only the first room to fall victim! But part of the purpose of all this remodeling is so I can focus more on my drawing, so I’m trying to keep my hand in at the same time. I think some of my IF pieces are going to be more sketchlike for a while, as I’m trying to use them to work out the areas where I’m weaker. I’m also probably not going to color most of them unless I’m particularly moved, to make sure I’m not relying on the coloring too much.

This week’s Illustration Friday topic proved a challenge, as I find faces one of the most difficult things to render in pen and ink, and hats – much like shoes – are difficult to draw so they look right. I went through one of the fashion magazines I have on my bookshelf for times like this and found almost every single picture of people wearing hats. There weren’t many, considering the size of the magazine, and most were all taken from the same couple of articles/ads.  Ink over pencil sketches, photographed out of my sketchbook instead of scanned (hence the dubious picture quality this week, sorry). Some of the faces came out better than the others, but most bear the marks of being drawn from photographs. Although one of them was drawn out of my head – can you tell which?