I have a full-time graphic design job which I love. The work is meaningful and creatively rewarding, my co-workers are great, and the company is good to us. Maybe that’s why I barely noticed the time passing. But it still came as shock to realize that I just passed my ten-year anniversary with the company.

My actual anniversary date was months ago. Technically, my anniversary as a salaried employee was in November, but I’d started working as a contractor for them way back in June 1997. So, why is it only hitting me now?

Last week, the head of my department handed me my anniversary gift. The company is generous in many ways, but cash awards are not one of them. So on service anniversaries we get a small catalog of gifts to pick from and we tell them which one we want. I picked mine out back in December, the lovely little necklace pictured below. 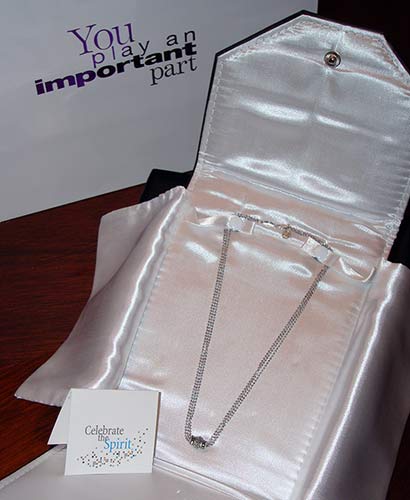 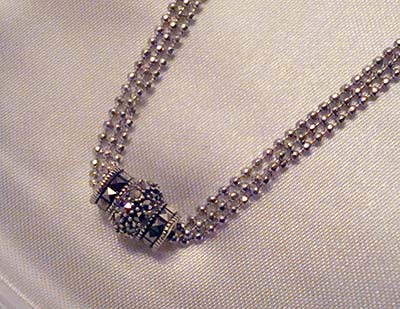 (My husband voted for the portable smoker, but I knew it would have just joined the waffle iron and the sandwich maker and deep fryer sitting unused in the cabinet. They’d seemed like a good idea at the time too. So I picked something sparkly that was just for me.)

Even going through the catalog didn’t phase me particularly. But when our department head walked in on us during a meeting with the familiar gift bag (with a terribly impersonal memo from HR still stapled to it) it really struck me: wow. I’ve really been working here for more than ten years. That’s officially longer than I’ve done anything else, and I was in the same elementary school building until 8th grade. In a few years I will have been living in my adopted hometown longer than I was in the town I grew up in, depending on whether you count the college years. It doesn’t help that my manager, who was there when I received my gift and was hired about the same time I was is completely in shock that he’s been in one place for ten years too.

It really didn’t help matters that people kept thinking it was my fifteenth anniversary instead of my tenth, either.

I guess that’s just getting older. I still think of myself as “just out of college” but that’s getting further and further away. It’s just driven home by the newest addition to our dept who was, like me, hired almost right out of college. Only much more recently.

I know I’m not “old” but I never exactly was one of the hip, with-it kids to begin with. If anything, I like to think that my cool-factor has increased somewhat with the greater confidence I have now. I was the stereotypical scrubby nerd throughout my youth. Now I’m taking better care of myself both physically and emotionally. I actually have a pretty clear idea of what I want my future to be like… and I know what I need to do to make that happen.

It could be easy to take this milestone as representing the relentless passing of time and inevitability of aging, or even a certain amount of career stagnation. I’m trying to take this milestone of how far I’ve come: my skills have progressed substantially over the years, I have the respect of my co-workers, and I survived the layoffs a few years ago. I have a job that I truly enjoy, and at the same time I’m confident enough in my abilities to get more aggressive about pursuing the other things I really enjoy which it doesn’t provide, including my illustration work.

Oh, and I’ve gotten married, earned my MFA, and bought a house, while I’m counting milestones. Not a bad start, really.

And that young co-worker? She’s coming up on her fifth anniversary soon…

1 thought on “Has it really been ten years…?”