So, I’ve been feeling a bit “back to basics” the past few weeks. Last week I sat down to do some character sketches with no particularly clear ideas in mind and just drew a total blank. I wasn’t liking the way anything turned out, and was starting to develop “blank page syndrome”  staring at the empty page until it felt like it had sucked my brain out.

This is one of my weaknesses: I have to have a project. If there’s not a specific goal in mind, it’s like pulling teeth to make things happen. It can be an entirely personal goal, but it has to be something concrete.

So why weren’t the character sketches working? No goal. As I thought about it, though, the goal in doing character sketches was actually to practice drawing people. I’ve been doing animals and such for so long now that I’m feeling a bit rusty on the actual human figure.

Ah, now there’s a goal! So I pulled out one of the dusty, flea-market book finds off of my shelf: Vital Karate. Even then I started delving too deep, paging through the whole book to find a pose I liked, laboring over a single sketch. But I shook it off, and went back to the basics. I spent what time I had left that evening doing speed sketches chosen from random pages until it was time for bed: 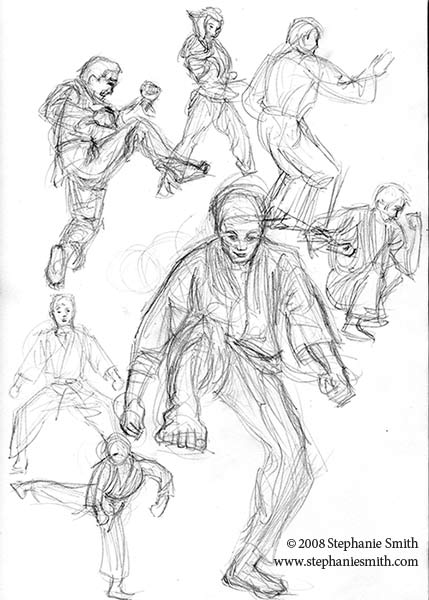 Of course, as with most photographic reference it was a challenge working around some of the distortions the camera introduces to the true proportions of the figure. Drawing from life is always much more accurate.

As it happens, this past weekend I was meeting a friend at an event at the convention center. In a nearly-miraculous turn of events, I arrived early. A lot early, in fact. But, as it turned out, downstairs from the event we were going to was a huge cheerleader competition, and the various groups were mustering in the lobby below, in full view of the balcony where I was standing. What a great opportunity for another elementary drill: gesture drawings from life.

I’m horribly self-concious about sketching other people in public, so this was perfect for me. I was able to scribble away in total anonymity on the backs of fliers with a ballpoint pen; unfortunately, I’d switched purses for the day and was without the usual abundance of pens and pencils and little notepads I’m usually lugging around. Squinting through the distance for half an hour really drove home how overdue I am for a new pair of glasses, but also forced me to forego details for broad strokes. As an extra challenge, the girls hardly stood still at all. It was very good practice for someone who’s gotten used to using photographic reference for almost everything.