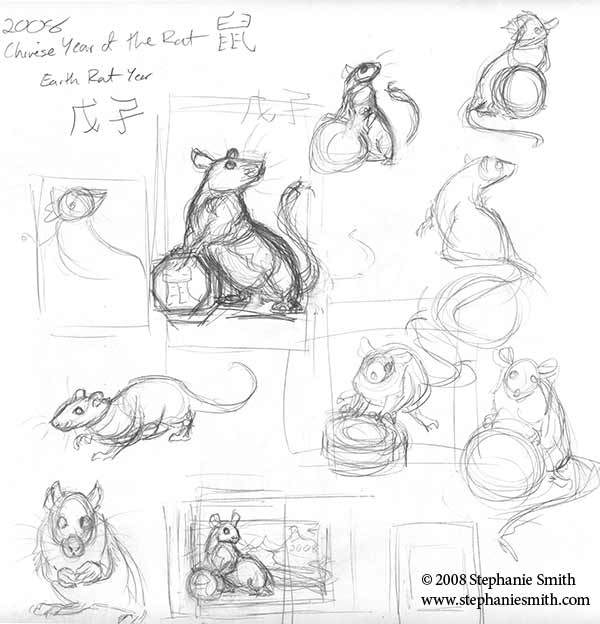 Time was a bit short this week for this week’s Illustration Friday topic, tho I found it quite intriguing. I’m in the midst of a project, which will be a series, which could fit, but it’s still in progress. So that’s what I’m posting today: work in progress! As always, click to enlarge.
Like many artists, every piece I make starts out something like this. Once I have my basic idea I doodle and sketch until I’ve worked out all the proportions, poses, and details to my satisfaction. Because I work in ink I have to get as much figured out in the pencil sketch and underdrawing as possible, while I can still erase easily. Sometimes there are layers of tracing paper and/or photocopies of previous sketches taped down as I refine the layout. Sometimes these sketch pages are more satisfying than the finished piece! Usually there’s one that really stands out on the page, but sometimes it’s harder to choose.

I was looking for some of my older work that would qualify, but couldn’t find anything already digitized. Which has me a bit worried, since one project was done digitally. when I have a chance this weekend I’m going to have to go through my miscellaneous backup CDs to look for it. I’m forcing myself to be better about backups, but I don’t have the same hardware for my home system as I do at work, which automates the process so I don’t have to think about. In fact, I have redundant multiple backups at work, which has saved my butt more than once. But at home my backups tend to be in batches of CDs which can get a bit messy as each one is in whatever filing system that seemed like a good idea at the time so the same file might be on more than one disk but in a different folder.  And after two house moves and three computers every now and then I uncover another stash of disks, but I think I’ve gotten them all now. What I’m overdue for is a big session of going through all the disks with the multiple versions of my files and the final versions of everything to make multiple copies of my master archive. And getting a decent firewire drive. Can’t have too many backups!