This week’s Illustration Friday topic actually fit quite well into a personal project I’m working on. Alas, at the end of a hectic week where I barely had time to do any drawing at all I managed to get the main figure sorted out, but the garden part of the composition was eluding me. Not even enough to post the sketch.

So instead, a treat from the dusty archives: 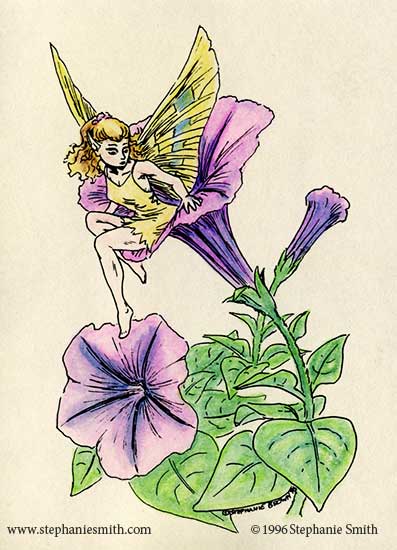 Yes, flower fairies, not the most original I admit. But always fun!

Fresh out of college back in 1996, when the internet was shiny and new and full of nerd jokes and little else, I thought it would be a great idea to make and sell notecards. What a concept, right? Well, I had no cash, no real plans, and was severely lacking in clues as well, but I made a handful of designs  cards, bookmarks, mini-posters  ran them off at Kinkos and tried to sell them a local flea market where the tables were cheap and a friend was scraping a few extra dollars a week giving tarot readings. Some, like these, I colored with watercolors and colored pencil.

They didn’t really sell. Eventually I got a job that actually paid the rent and another that let me buy food too, and with my weekends thus occupied the remaining inventory have sat in a box in the back of various closets for a very long time. 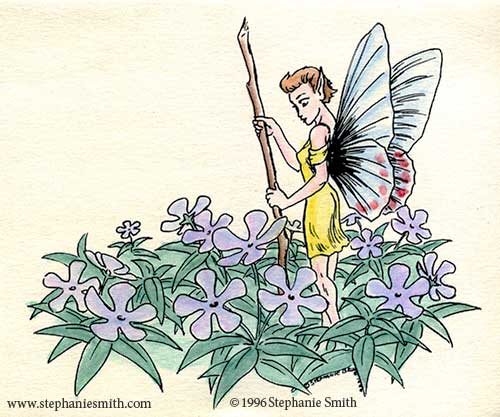 (I also thought puns like this were hysterically funny at the time.)

It amuses me to look at these now as I’m embarking on the 21st-century version of the same exercise. I’m tempted to add these to the lines I’m making now, but I might have to redraw them first. The odd proportions don’t bother me too much, but the head on the petunia fairy makes me wince, and these were two of the best in the series. At the least I’d recolor them digitally.

I’m really hoping to stick to my plan and post an update every week  with a preference for new work! But I’ve been busily filling up my schedule for the spring and it now includes  lot more travel than I was planning. If at all possible, I’ll post while I’m away but there’ll be at least something here every week that I’m home, that’s a promise.