Last weekend I attended the Illustration Conference in NYC. The whole weekend was exhausting, but a total blast! I met so many fellow illustrators from all over  from those just starting out to those who’ve been in the business for years, and those who are transitioning out of (and into) illustration to/from related fields. There was a fair amount of business talk and shop talk, but there was so much creative energy and talent on display  it was practically crackling through the air. I had the chance to share portfolios with some amazingly talented artists.

I came back home re-energized and full of ideas! Being a compulsive note-taker I did more writing and looking than sketching at the conference, but there are a few scribbles scattered around my notes.

I didn’t have a chance to participate in the big SketchCrawl that preceeded the main conference, but I heard so much about it, it’s an idea I’m definitely going to have to explore. The man who spearheads it, Enrico Casarosa, really hit the nail on the head when he talked about carrying your sketchbook everywhere but never taking it out of your bag.

The conference itself took place in a hotel in Manhatten, but I was crashing at my brothers’ apartment in Brooklyn. I found that the fastest way to make the train show up was to settle in for a really detailed sketch of my surroundings. But I managed to snag a few informal sketches along the way. 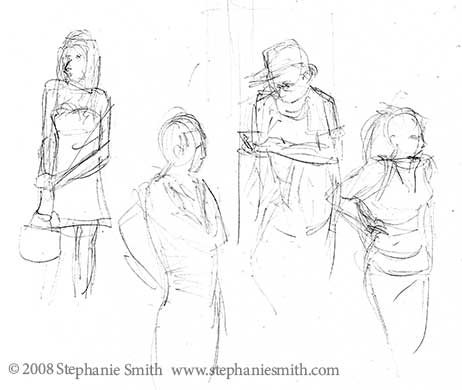 Of course, as is the case after every conference I’ve ever been to, I’ve come down with a nasty head cold. This one totally snuck up on me Tuesday afternoon, when I thought I was “safe,” so I’ve barely had a chance to go through everything I brought back with me, much less e-mailing all the wonderful people I met… but I will! But not right now… this is the most I’ve been upright since the cold hit me and it’s time to lie down…