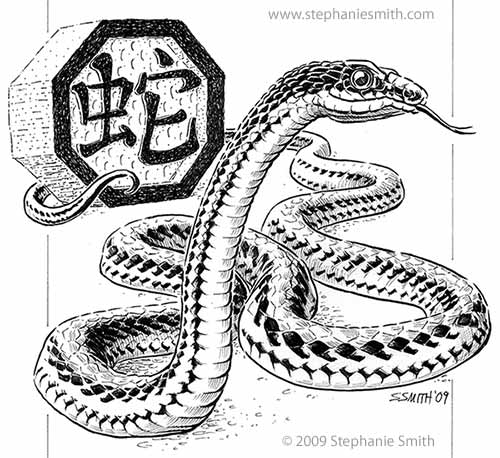 Even though this week’s Illustration Friday topic gave me several intriguing ideas, I don’t have time right now to make any of them! (sketches will be filed away for later tho…) Instead, I’m uploading a preview of a particularly intricate image I’ve been working on. I just finished the ink drawing this week, and I thought those scales were going to kill me. Scale patterns are so complex and regular, I had to deliberately simplify or I’d be working on it for weeks despite modeling it after a species with simple coloration. I’ll be adding some more details and color shortly.

I just spent the evening scanning in this and three others in the series… almost halfway done! For anyone who doesn’t recognize it, this is the Snake from the Chinese Zodiac, and will be part of a series of 12. Of course, I’ve changed direction slightly and will have to edit my Ox image to match, but that’s what happens when a control freak like me has no outside deadlines.