Perhaps an unusual choice for this week’s Illustration Friday topic, anyone who can model so unselfconsciously for life drawing strikes me as the epitome of poise. This model in particular managed to look positively serene while wearing french powdered wig in a very crowded and noisy bar while people were staring at her and scribbling frantically.

While I was attending the SWSX conference in March, I had the great fortune to attend an event which included a session of Dr. Sketchy’s Anti-Art School.  There’s more info at the link, but in brief it’s like a life drawing class except instead of in a formal art studio it’s at a bar or club, and instead of a nude model you have a cabaret or burlesque performer in costume. 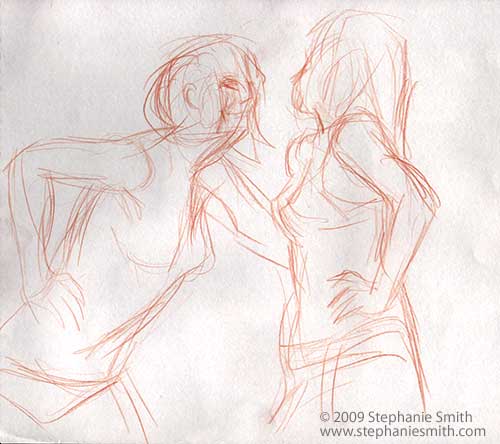 In this particular case, the life drawing was going on in the back of the club, while an actual burlesque show was going on at the main stage. Because it was part of the conference it was packed, but I managed to snag a stool and pad of paper in the drawing area. The performers were lining up to model when they were between sets, they were so excited to participate. It was very cool!

We only did five-minute poses. It has been sooooo long since I did life drawing like this, much less while balancing a pad of paper on my knee sitting on a barstool, but it was great fun. 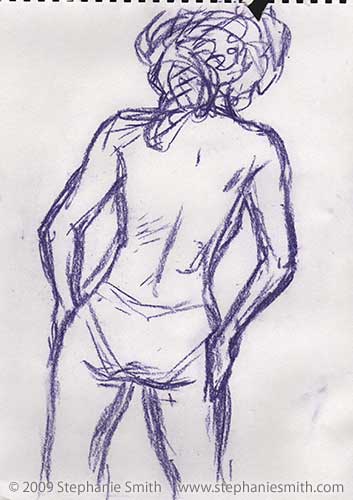 Unfortunately, just as I really felt I was getting warmed up, the rest of my cohorts were ready to move on. But I got several very nice sketches done, and they even managed to survive the night intact.

There are Dr. Sketchy’s clubs scattered all over the country… if this sounds like fun to you, google to see if there’s one near you!