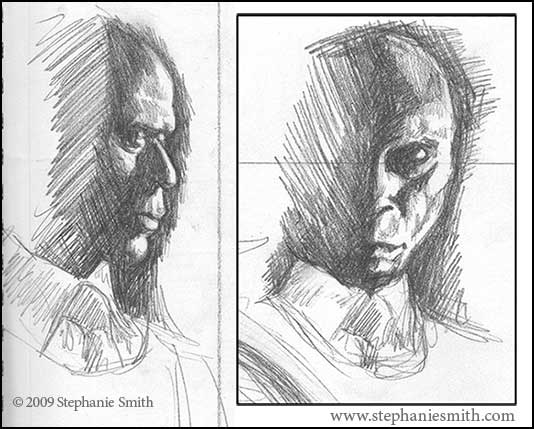 I haven’t been posting too many actual “scribbles” lately,  so just for a change of pace here’s a little something that emerged when I was supposed to be working on another drawing.

One of my “bad” work habits is having the TV on while I’m drawing.  This is, incidentally, pretty much the only way I watch most TV since it’s one of the few times I’m actually sitting still that I’m not in front of a computer. I make a point of picking shows for this purpose that are mostly dialog driven or aren’t actually all that engrossing, so I don’t have to watch the screen. I was doing this the other day and just happened to glance up when there was a particularly compelling scene, a dark room with dramatic lighting on the actor so that you only saw the very edges of his already pretty dramatic features. I had to hit pause and capture it, right on the page I was already sketching on. Extra points* for anyone who can name the show!

So even though I was “goofing off” with this one, this week I committed the last of the Chinese Zodiac series to paper and scanned it in. I still have to add colors, but they’ll be done soon, which means the whole series will be showing up very soon in my new Critterwings store… you know about the store, right?  I’m slowly adapting my existing artwork into new products  I added a few mugs with Butterfly images to the Critterwings Zazzle shop this weekend  so stop by frequently to see what’s new!

* Note: Points have no value except the warm glow of knowing that you were right.