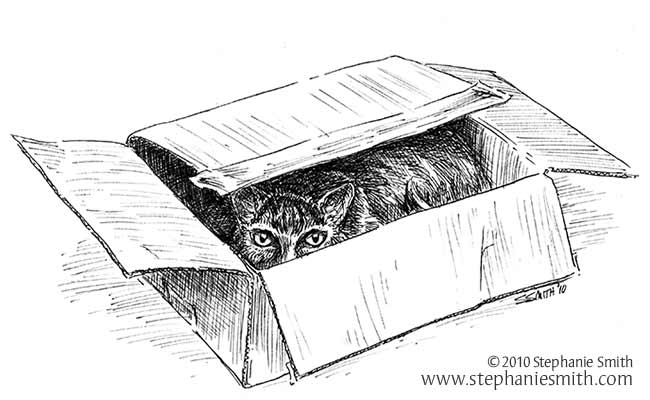 I’m hoping this isn’t a bad omen for my return to Illustration Friday: this drawing, “Cat Contained,” was conceived and drawn before I realized I’d mis-read the Illustration Friday word for this week. However, I think it still works, after all, I’d just have to close that flap and…

Just a quick drawing on evening while watching a movie. Both of my cats usually make a beeline for an open box in the middle of the floor, but tonight they decided it was the least interesting thing in the room so I had to wing the cat. This time it’s Tinkerbell, who is generally a far more “contained” cat than Tony, even though he’s the one who’s a fiend for squeezing into small boxes. Original drawing with 0.5 tech pen on 9×12″ smooth bristol, with a light pencil sketch underneath (erased).

However,  what is very much in keeping with the IF word this week is that today was Human Trafficking Awareness Day.  Modern slavery is a truly horrible and growing and largely invisible problem in the developed world, and several of my favorite webcomics artists have teamed up in a fundraiser to support groups trying to help the victims of this criminal practice. If you’d like to help out with this worthy cause, check out the Comic Creator Alliance this week!