The first part of of my recent shopping expedition to the art store was about the non-brush pens. But the rest of my shopping basket was full of brush pens: self-contained pens designed to emulate using a small brush with ink. Why is that important? The technical pens I usually use are designed to make lines that are always the same width, but that’s not always the look I want. Due to having cats whose instincts are so refined that they believe they can walk across a glass-topped table that’s at a 45° angle (they can’t) using an actual open ink pot is out of the question unless I want to end every art session with a massive ink-spill clean-up. Fortunately I’m not the only one to have this issue, and for folks like me they’ve invented brush pens!

So what did I try this time around?

First up, for reference, the Faber-Castell PITT B 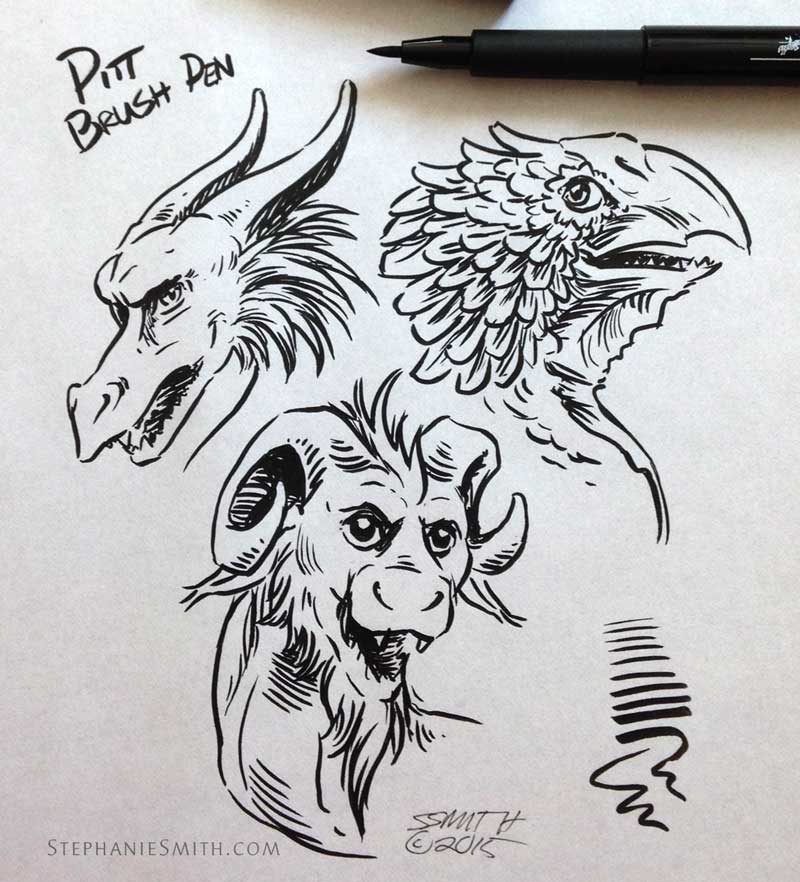 I’ve been using this pen quite a bit lately because of the issues I’m having with the Sakura Brush pens (losing their fine points quickly, fraying if I’m not careful, etc.) so I used it here as a benchmark for comparison. As you can see, it has a pretty wide range from wide to narrow, but it can difficult (not impossible!) to get extremely fine lines.

Since it has a flexible solid fiber point, it can get mashed and damaged, but I’ve found it to be relatively sturdy. It’s easier to get extreme line variation by changing the angle and direction of the pen rather than pressing harder so the point bends, but in practice you’d do both. This was a new pen, so it wasn’t broken in very much and started out a bit on the stiff side. It’s very easy to control, but not as expressive as some others. Even though it’s classified as a brush pen it doesn’t handle much like a real brush, it always remains a bit stiff. It uses a waterproof pigment ink so if I want to embellish with watercolor later I can do so without the ink lines bleeding  or smearing. This one has become a familiar and comfortable go-to pen for me. 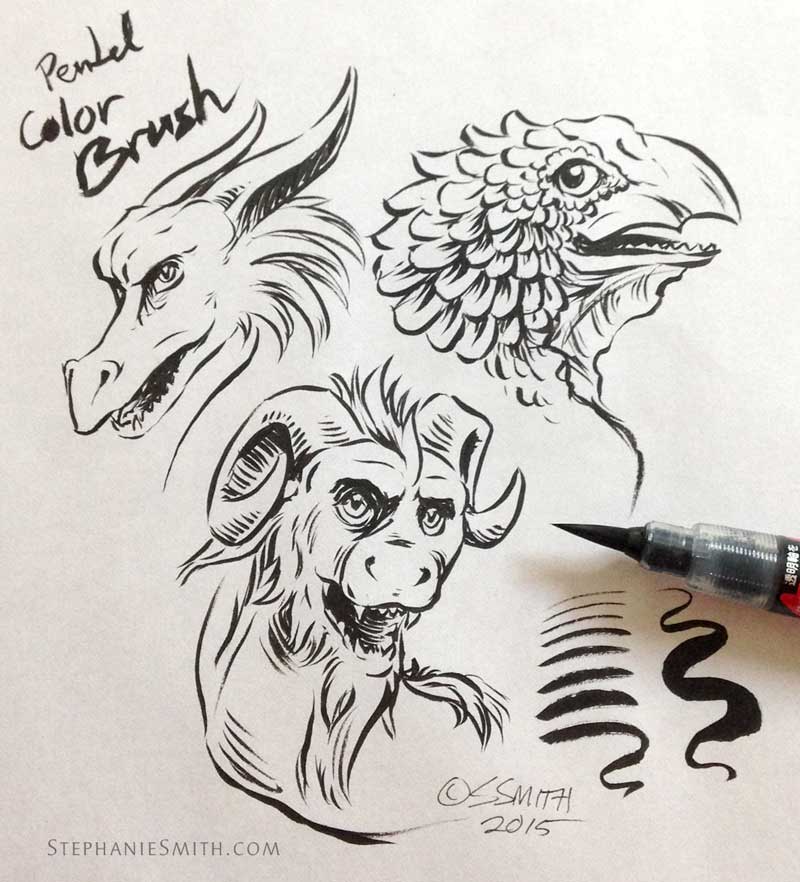 This pen has a few distinguishing characteristics:

The brush is clearly the standout feature of this pen. I haven’t used an actual brush for a while, so I wasn’t sure how well I was going to handle this one. When I opened it my first reaction was “this brush is way to big for my drawing, it’s going to look completely blobby unless I draw something larger.” Boy was I wrong!  As you can see in the sketch lines above, it has an impressive range, making lines from very fine to wide, even in the same stroke, moreso than the brush pens with a solid nib. Right out of the box, the Color Brush’s synthetic fiber bristles were still white and clean. The pen has a ring to keep the ink inside the storage chamber during shipping, and once it’s removed you have to prime the brush a bit (squeezing the ink out) to saturate the bristles with ink. After just a little bit of doodling it created a smooth, even line. It seems like it’ll need just a bit of a squeeze to re-prime it every time I start using it. 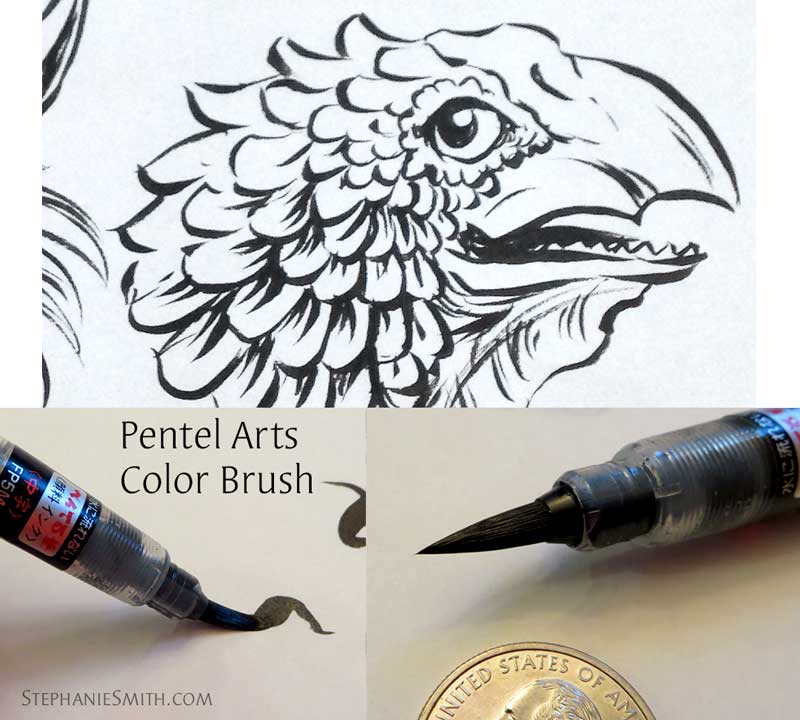 Even after pressing hard enough to make the widest lines the brush springs back very quickly to a fine point. The bristles have just the right amount of give that it offers a lot of control, although it’s still a brush so there’s more wiggle to it than the more pen-like brush pens. This drawing was made mostly with the very tip of the pen with very little pressure, but didn’t need such a light touch that it was difficult to maintain. Using a very hard pressure, it was difficult to maintain a clean, smooth line, so it’s not really something you can use as a mop brush, although it seems like it would do an ok job of filling large areas with solid black. With very little warm-up I was up and running, although I’ll need more practice to feel really proficient. Ordinarily, I’d probably have switched to a technical pen or solid-nib pen for tiny details like the pupils of the eyes — and definitely the lettering! — but I wanted to push my limits. I’m really enjoying this brush, and have been wanting to find a good way to use more real brush-work in my drawing. However, because of the flexibility of the barrel I’d be reluctant to just chuck it into my travel bag like some of my other pens for fear it will become damaged or waste ink. I’ll be practicing more with this one!

Pentel Arts makes several different brush pens, all with different qualities and features. I picked up a couple more in this same shopping trip, but haven’t opened them all yet, for fear they’ll dry out. But I’m looking forward to trying them all!