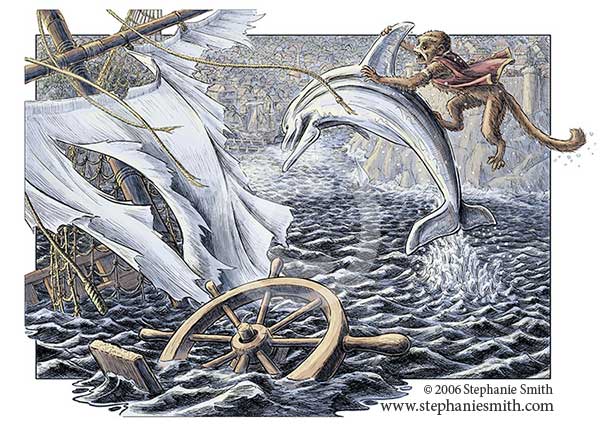 This week’s posting for Illustration Friday is from my archives again. This is another one from Aesop’s Fables, one of his less-well-known stories The Monkey and the Dolphin. It’s the story of a dolphin saving a monkey… sort of:

A Sailor, bound on a long voyage, took with him a Monkey to amuse him while on shipboard. As he sailed off the coast of Greece, the ship became caught in a violent storm. The ship was wrecked, and all the crew were thrown into the water and forced to swim for their lives. A Dolphin saw the Monkey struggling, and thinking he was a man, whom dolphins are said to befriend, he went to help him and carried him on his back straight for the shore.

When they arrived within sight of Piraeus, the harbor of Athens, the Dolphin asked if the Monkey if he were an Athenian.

Yes, answered the Monkey. Certainly. Im from one of the most noble families in the city.

Then of course you know Piraeus, said the Dolphin.

Oh, yes, replied the Monkey, supposing that it was the name of some distinguished citizen, He is one of my most intimate friends.

Infuriated at these falsehoods, the Dolphin dived to the bottom of the water and left the lying monkey to his fate.

It’s a little grim, but I really couldn’t resist the chance to draw a picture of a monkey riding a dolphin.

Not much more time to chat this week. It’s been a bit hectic around here, as I’ve had on my graphic-designer hat reformatting a lot of my older work for reuse. Between that and spring maintenance taking up most of my “art time” I haven’t even had time to finish my new drawings, much less visit anyone’s blogs  I’ll get caught up soon! My frog from a few weeks back is just waiting for a few hours of quality coloring time, and he has a friend in the same situation… I want to post something new here before I disappear on my trip at the end of the month, darnit!

2 thoughts on “Illustration Friday: Save”