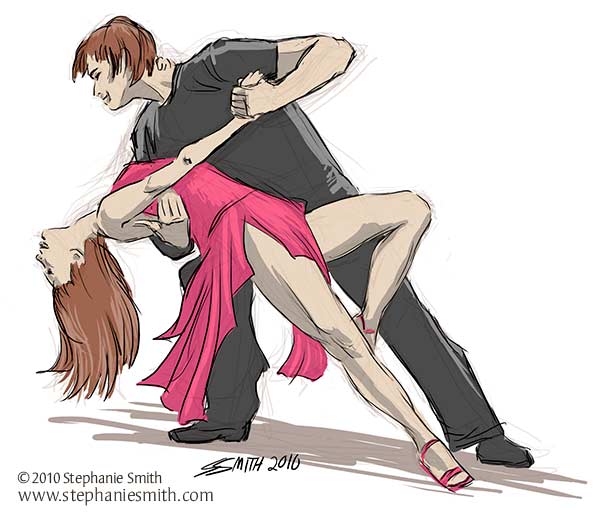 Well, this one was finished in time only on a technicality… thank goodness the Illustration Friday website is on Pacific Standard Time! Another stab at something different… unlike last week, which was all old-school paint-on-acetate, this week it’s all digital, with no “real” media involved!

Every so often I think to myself “hey, I just want to do something really quick, I’ll just draw it right in Photoshop instead of mucking about with the paper and the pens and the scanner and all.” So far, it’s never been the faster way to go. The slippery tablet and inability to turn the paper around to get the right angle both conspire to make what should be nice, simple lines a constant string of do-overs. Oh well, practice makes perfect. I decided to leave my “sketch” layer in the finished drawing, because it seemed to add a nice bit of extra movement and texture, and since I’d ordinarily consider something with this level of detail a study or a sketch rather than a finished drawing.

It’s been spring-cleaning season around here, but in between getting the garden ready for planting and cleaning the house I’ve been hitting the drawing table. I have a few projects that need to be finished in the next few weeks… I’ll be sharing them here when they’re done!