I haven’t talked much in this blog about comics, but it’s true… our house is full of them. My husband has been collecting since he was 12, while I discovered them later in life. I’m not a big fan of the traditional superhero genre tho, I usually prefer fantasy stories instead, and have become a voracious reader of various online comics. So while he was eager to crawl through the bins at Baltimore Comic-Con a few weeks ago, I’d been saving up my mad money for this past weekend, and my annual pilgrimage to Bethesda, MD for the Small Press Expo. 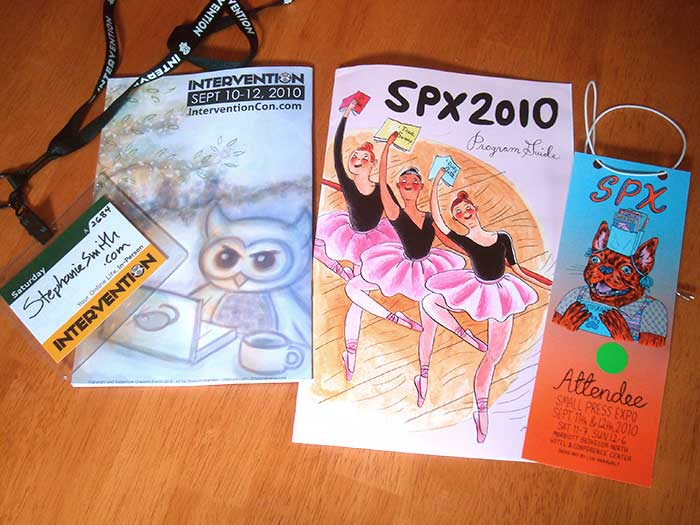 SPX is one of the longer-running conventions for independent creators and small-scale publishers of comics of all kinds, and increasingly the webcomics folks have been joining in to sell their own “dead tree” editions. This year I also made a detour to a brand-new conference taking place just up the street, Intervention, which was focused more exclusively on the webcomics crowd. Both had authors in attendance I wanted to meet and books I knew I’d want to purchase  Intervention had a few folks who rarely come to this area  so I bit the bullet and paid the separate entry fees… and then spent WAY too much on books! Both also had their share of vendors selling artwork, small crafts, and other fun stuff. The set of tetris magnets I bought is already racking up points on my refrigerator. 🙂 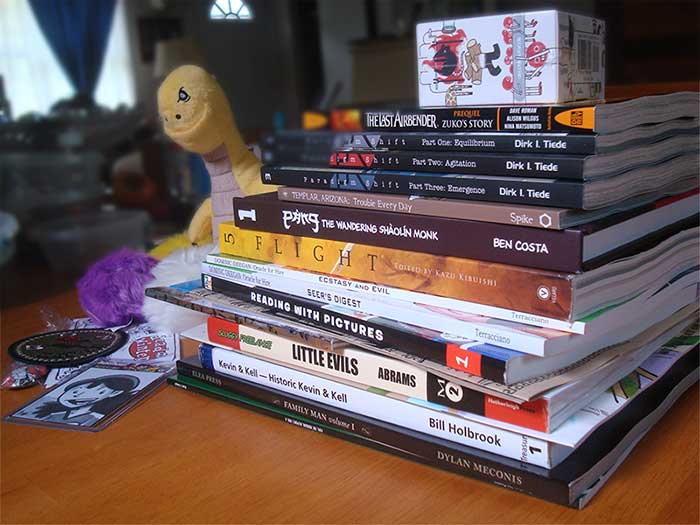 Yup, I’m glad I brought the backpack! (I was also hauling around my own sketchbook and camera… not that I ever took either of them out, I guess they were just there as extra ballast) If anyone I ran into this weekend is reading this… HI!!!! It was great meeting and talking with all you wonderful artists/writers! I envy all of you with the drive and dedication to your artform, especially knowing how hard it can be to make a living at it. Kudos!

Would I attend both again next year? Well… honestly the higher entry price for Intervention made it a little hard to justify for me. I don’t generally hang around for the programming at these things. I think I’ve attended 3 panels/presentations in all the years I’ve been going to SPX. I do a round or two through all the tables and then call it a day. And this year in particular I had to leave around 4pm to meet friends for “The Day the Earth Stood Still” which was showing that weekend only at the AFI Theater. Yes, it was an all day geek-fest. I guess I’ll have to see what happens next year. For now I just have to figure out where on my groaning bookshelves these are all going to fit!

If there’s any interest, I can go through my stack of books in more detail… 🙂